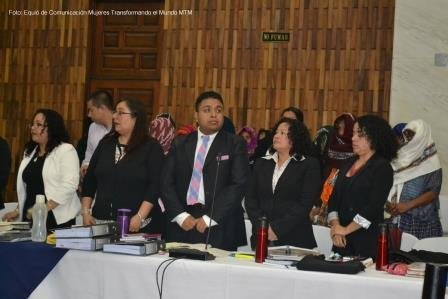 “We feel satisfied that the women survivors from Sepur Zarco are present at the beginning of the Trial”, expressed Paula Barrios, director of Women Transforming the World (Mujeres Transformando el Mundo – MTM), plaintiffs in the Sepur Zarco case.

The representative of MTM indicated that even though every men and women have the right to have access to justice, the indifference, discrimination and the stigma that exists in the judicial system makes it impossible for a woman, and even worse if she is indigenous, to have access to be in court and that justice be done.

Barrios further detailed that Women Transforming the World (Mujeres Transformando el Mundo – MTM) conducted through strategic litigation six years of work in the case; in order to break down the walls of impunity that alienates women to be subjects of right and to live their life free from violence.

Three days after de initiation of the trial, the testimonies of men and women have been heard narrating before the Court of High Risk A presided by the judge Yassmin Barrios, what they lived during the 80’s in Sepur Zarco because of the Guatemalan army.  The representative of MTM said that what was told by the witnesses ratifies what was declared by the women survivors in the year 2012 as anticipated evidence.

At the same time she said that they will continue to expose the evidence that they have to sustain the crimes that cornel Esteelmer Francisco Reyes Girón and the military commissioner Heriberto Valdez Asig have been accused of.

The coordinator of MTM said that due to the precision of how the hearing has developed, we expect that at the end of February we can count on a ruling.

The major players of this trial are the women survivors that have not caved in the way of seeking justice, Barrios indicated.  “This sets a precedent at national and international level because the women survivors of sexual violence, sexual and domestic slavery are in front of a national court witnessing the hearings where the responsible of those crimes are being judged”.

The representative of MTM make a call to students, social organizations, women organizations, indigenous young women, farmers as well as individuals to witness the hearings and be part of this historic trial that is taking place in Guatemala.