““I am very happy to be able to follow the path of justice, today I offer a greeting to all

women” said the president of the Collective Jalok U, a woman survivor of Sepur Zarco.

advance in the path that they started.  She recognizes that they dealt with fear, they

military settlement Sepur Zarco so that history would not repeat itself.

solidarity and companionship of the women from other communities, towns and

organizations; additionally she said that the women survivors are organized through

Collective Jalok U, change of face in the q’eqchi language, and that being organized has

been important to feel the unity and strength so they are not afraid of speaking.

“We cried allot when we spoke, when we shared what had happened to us”, said the

representative of the women; additionally she said that when they initiated the process of

because when they spoke of what had happened that caused them to hurt and feel pain.

“So those who listen will know that we are saying the truth”, “I find myself in this

important struggle of keep looking for my husband…”, “…what I want is to find my

happiness and find justice for us so that we can be in peace”, the president of Collective

The 11 q’eqchi women victims of sexual violence, sexual and domestic slavery done by the

army of Guatemala during the internal armed conflict, were lcated at the right side of the

Visitors Room of the Supreme Court of Justice; they attentively were listening and

observing the development of the trial Sepur Zarco.

turns to narrate during the trial what they and their families had gone through.  While

they were listening to the witnesses, after they swore to say the truth and answer the

questions that they were asked, the survivors would lower their faces to dry the tears.

national and international level, because it’s the first case at a worldwide level that it’s

been taken to a national court for the crimes of sexual violence, sexual and domestic

slavery, and other cases of sexual violation during the armed conflicts like in Yugoslavia

and Rwanda have been aired in international agencies. 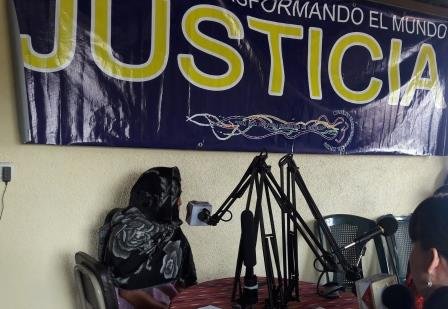